Write the truth.  I said I would write the truth when I started this blog.  I have done that but sometimes I think what I say makes me sound a wee bit better than I really am.  So, tonight, I’ll tell the truth, the whole truth, and nothing but the truth, so help me God.

I suck in emergencies.  I mean like….I majorly suck.

There.  I said it.  The truth is out.  Now how in the world I have lived with a cop for 38 years and am not good in emergencies, I’ll never know.  I’m unobservant.  I’m unaware of my surroundings.  I don’t have an escape route in mind.  I don’t know where the exits are.  I never have a Kleenex or a wet-wipe or a Band-Aid.  I can’t change a flat-tire.  I don’t have a plan.   I don’t have any food stocked-up.  I will fail all emergency preparedness drills.

While traveling in Toronto, the four-pack (me, my husband, my 10 year old son and my 16 year old daughter) were excited to ride the subway.  After we stood at the ticket place for about 32 minutes trying to figure out how to buy a ticket, we hopped on the train.  At our stop, we all moved to the door to get off.  Now, if you don’t know about subway etiquette, I’ll fill you in.  There isn’t any.  People trying to get on don’t wait for people trying to get off.  So… with that in mind…picture the 10 year-old quickly hopping off the train, approximately 247 Canadians, shoulder-to-shoulder shoving their way onto the train, and what is now a three-pack stuck on the train watching the doors shut and realizing the train is pulling away.  I looked out the window and saw my baby boy standing on a subway platform in a foreign country (I know…it’s just Canada, but still) watching us leave on a midnight train to nowhere.  All I could see were eyes.  Two big, brown, brobdingnagian, bug eyeballs staring at me as we pulled away from the platform.

I think I was screaming.  No, I know I was screaming.  I’m pretty sure I wasn’t thinking clearly while I was screaming.  I think the words “Oh my God!  Oh my God!  Oh my God!” were uttered repeatedly at about 120 dBs.  At some point, I think I tried to yell at my little boy through the window using my mouth in that great-big-exaggerated-when-you-are-trying-to-talk-to-someone-who-you-know-can’t-hear-you way.   I mouthed, “Don’t move…We’ll be right back!” all the while wondering how far it was to the next stop, how long it would take us to get back, if we could figure out how to buy another ticket, if we knew which stop we lost him at, and if he would still be there when we got back.  I had that ominous feeling someone was going to get him before I could get back.  After all, he was really, really cute and he knew how to play ice hockey so he would clearly have been a prime target for a Canadian kidnapper.

Now…while I was in full-blown-panic-mode…my police husband was quietly analyzing the situation.  His head-on-a-swivel went 360° and he immediately spotted the luminous yellow bar with the gigantic sign (which I might mention was hanging right over my head) that said, “Push only when emergency medical, police, or fire services are needed.”  He pushed it.  The train stopped.  Everyone looked around most confusedly.  The doors opened.  The three-pack disembarked and the four-pack caught the next train.

Did I mention I am bad in emergencies? 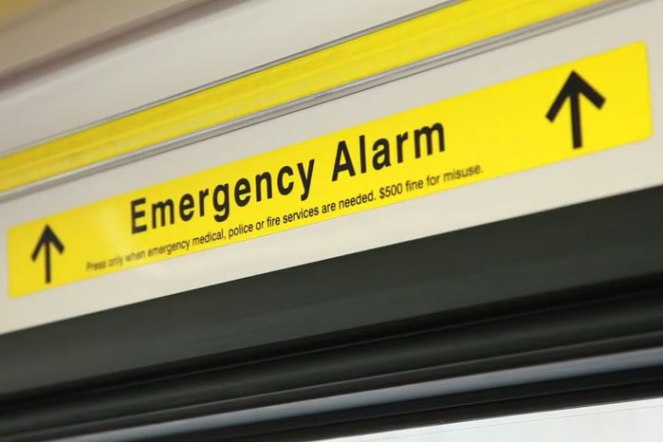 One thought on “Exhibit A”