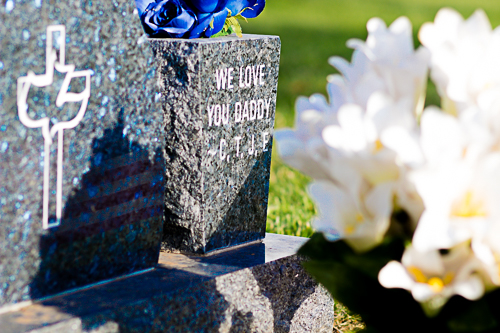 I took the picture.  I didn’t see it in the moment.  But, there it is casting its image in the shadow.  The shadow on a tombstone of one who made the ultimate sacrifice.

There in the shadow, the vaguely visible red stripes symbolize the valor of this officer who upheld it and what it stood for.  Faint white stripes signify purity and innocence.  Innocence which succumbed to the world the minute he put on a badge and answered his first call.  Five-point stars march in formation across the blue background—the blue of vigilance, perseverance and justice.

There in the shadow I saw it reflecting in all its glory on the gray granite.  The granite that marks the final resting place of an officer who vowed to defend the constitution and the laws of the United States of America against all enemies, foreign and domestic.  He took the obligation freely and without any reservation.  And he paid the price.

The red, white and blue of the flag will continue to wave.  It will wave over our nation and over our officer’s graves.  And police officers across the United States will continue to defend the laws they vowed to defend.  No matter the price.

“When a police officer is killed, it’s not an agency that loses an officer, it’s an entire nation.” – Chris Cosgriff, ODMP Founder.  Officer Down Memorial Page