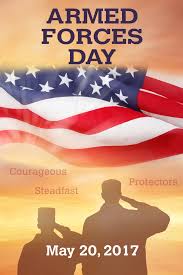 Today on Armed Forces Day, I cannot help but think of the sacrifices the Army, Navy, Air Force, Marines, and Coast Guard make every day for our country.  The sacrifices uniformed personnel make are crystal clear.  The sacrifices their families make are a little less evident.  Husbands, wives, moms, dads, and grandparents maintain households during deployments.   Wives take care of cars, buy houses, and have babies alone.  Children have birthdays without a parent to celebrate with.  Budgets are tight.  And yet men and women continue to put on the uniform willingly and families continue to operate in the shadow of the uniform.

Today, I salute the men and women who defend my country.  They are indeed courageous, steadfast protectors.

And, I salute their families.

“Freedom does not come without a price. We may sometimes take for granted the many liberties we enjoy in America, but they have all been earned through the ultimate sacrifice paid by so many of the members of our armed forces.” – – Congressman Charlie Dent